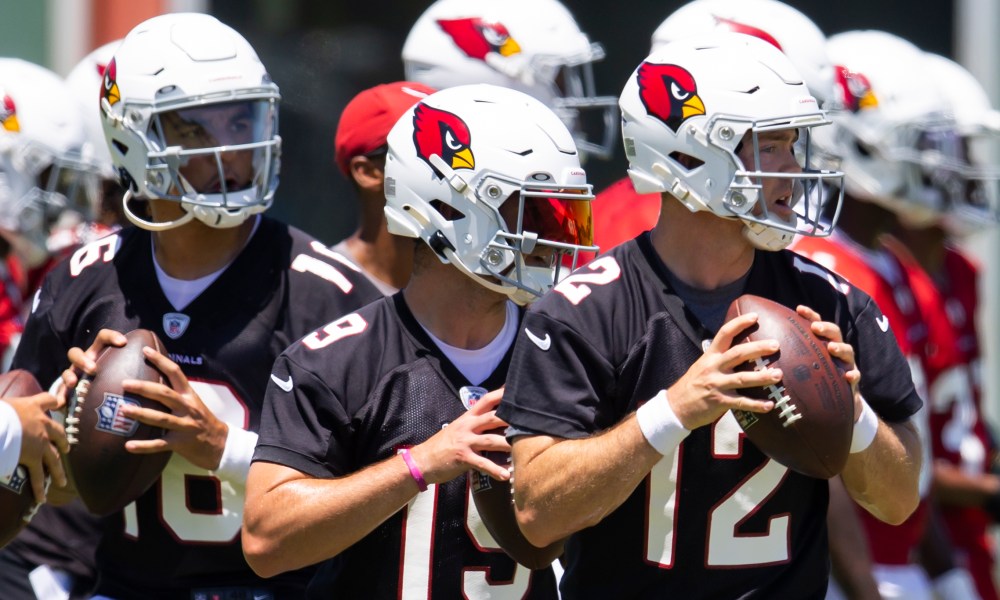 The Arizona Cardinals will kick-start their preseason by taking on the NFL’s 2021 miracle team, the Cincinnati Bengals, on Friday night. After serving as the perennial punchline team in the league, the Bengals shocked the world by winning the AFC championship and advancing to the Super Bowl last season. Meanwhile, the Cardinals saw a promising start to their season derailed by going one-and-out in an ugly playoff loss to the Super Bowl-winning Los Angeles Rams.

The Cardinals just made Kyler Murray a rich man with a fat, new contract, and he’s currently dealing with wrist soreness. It didn’t take a rocket scientist to figure out he isn’t playing in Thursday’s preseason opener.Backup quarterback Colt McCoy is also out due to arm soreness.

So that leaves Trace McSorley and undrafted rookie Jarrett Guarantano to captain the ship at quarterback in the first preseason game. The Bengals defense struggled early last season before coming on late. They were stout up front, but the secondary was leaking profusely when it came to yards allowed from big plays.

So it’ll be interesting to see if McSorley and Guarantano can turn the ball loose a bit in this matchup. Opposing teams averaged 248.7 passing yards per game against the Bengals last season, but they remained dominant throughout in stopping the run.

The offense for the Cardinals could get the spotlight treatment on Friday considering the massive shakeup the team had defensively in losing Chandler Jones to the Las Vegas Raiders. They also lost veteran linebacker Jordan Hicks as well. So the defense could take a step back this season.

It’s important to note that wide receiver Marquise Brown and tight end Trey McBride are both listed as questionable to play in this game.

Burrow unlikely for the Bengals’ opener

Most would assume that preseason games are meaningless. They may not be important regarding a player like quarterback Joe Burrow’s progression, but there is significant importance there overall to gage the depth of the team. There are rotational players and backups that will get quality reps through in-game action against the Cardinals on Thursday.

Both Burrow and wideout Tee Higgins are listed as questionable for the preseason opener. I wouldn’t count on either playing. So this matchup will be more about guys like Jake Browning, Brandon Allen and Drew Plitt stepping in at quarterback.

It hasn’t all been smooth sailing at training camp, but the Bengals are hoping to avoid plays like this one.

The quarterbacks and receivers in Cincy will get tested off the bat against a Cardinals team that had a top-10 passing defense last season. They have ball-hawks in the defensive backfield that can quickly turn this experience into a nightmare for a young signal-caller. The unit held opponents to an impressive 215.6 yards per game on the road last season.

But a gust of wind could come in and blow the defensive front right over.

I’d expect to see the running back room lead the way in this game. Will we get a look at Joe Mixon early? If not, this will probably end up being more of a Samaje Perine, Chris Evans and Trayveon Williams game.

Cardinals coach Kliff Kingsbury is 2-0 in NFL preseason openers. Even without Kyler Murray taking any snaps, he’ll have the more aggressive approach in Friday’s game. It also helps that Trace McSorley has at least one year under his belt in the Cardinals’ offense, which should be a significant benefit for the team in this matchup.

But the real key for Arizona here is their defense. Their defensive front took a hit with the loss of Chandler Jones, but the secondary is still a problem. They forced the fifth-most interceptions from opposing quarterbacks when playing on the road last season.

Meanwhile, Bengals coach Zac Taylor seems pretty disinterested in the preseason as far as a competitive standpoint. For the Bengals, it’s all about getting their key starters to the regular season opener healthy and in one piece. Both teams are likely to have a multitude of key offensive playmakers sitting out this game, which makes it more about the defenses.

And that’s were Arizona has the edge. I’m taking the points and the Cardinals in a road upset after a grueling defensive victory.