After Buffalo announced Josh Allen wouldn’t play, the line shifted, and Indianapolis become favorites. With tons of depth and a capable backup in Case Keenum, our NFL betting picks like the underdog Bills vs. the Colts.

The Indianapolis Colts and the Buffalo Bills open their respective preseason slates when they meet at Highmark Stadium this afternoon.

The Colts are looking to wipe the bad taste from their mouths of an embarrassing Week 18 loss to the Jaguars that cost them a playoff berth. The Bills won the AFC East last season but were ultimately dispatched in the divisional round in overtime by the Kansas City Chiefs in an instant classic.

Which AFC playoff hopeful will start their preseason with a victory? Find out in our free NFL picks and predictions for Colts vs. Bills on Saturday, August 13.

McDermott has won each of his last seven preseason games with the Bills, so he takes these exhibitions fairly seriously. Resting Allen would seem to contradict that, but he’s smart to prevent the possibility of an injury to his top signal caller. 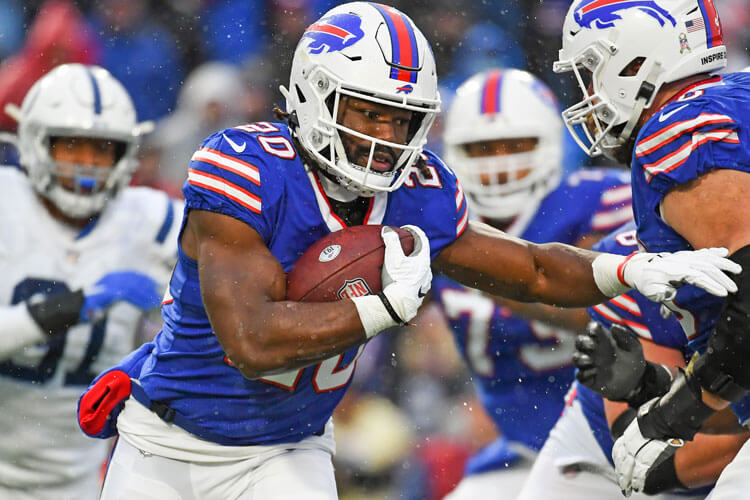 Buffalo would not be the preseason Super Bowl favorites if it didn’t have a deep roster, and quarterback is not a position it’s thin at. Case Keenum is expected to get the bulk of the early snaps for the Bills in this one.

The 34-year-old Houston product has been carrying a clipboard for most of the last few seasons, but it wasn’t all that long ago that he went 11-3 under center with the Vikings in 2017. Keenum won both of his starts in relief of Baker Mayfield with the Browns last year, completing 65.3 percent of his passes for 6.4 yards per attempt with three touchdowns and only one interception.

Bettors seem to be vastly overreacting to the Allen news, swinging the line five points. Now there appears to be plenty of value with the Bills, so contrarians should take their shot here.

While Keenum and the rest of the Bills’ offense do their thing, Matt Ryan and company should be able to keep up early on.

As head coach Frank Reich told reporters, the newest Colts quarterback will suit up for his team’s preseason opener. Bettors should expect Ryan to play “maybe a quarter, maybe a little less,” per Reich’s estimate.

Ryan regressed in 2021, authoring long-time lows in touchdowns (20) and yards per attempt (7.1) while tossing 12 interceptions. But the now 37-year-old signal caller was playing behind a woeful offensive line in Atlanta, and a change in scenery should help the Boston College product. Not having to face either Jordan Poyer or Tre’Davious White for Buffalo doesn’t hurt.

Also providing assistance in this game could be Jonathan Taylor, who led the NFL in both total rushes (332) and rushing yards (1,811) last season.

Why The Colts Could Cover The Spread

Without a doubt, the Colts are ready to take that next step in 2022. After falling flat on their faces in an embarrassing loss to the lowly Jaguars that ended up keeping Indianapolis out of the postseason, the Colts believe that they have what it takes to be a formidable squad this season. Obviously, with the addition of Matt Ryan who has Super Bowl playing experience, the Colts are hopeful that a strong and sturdy offensive line can keep Ryan healthy and also provide huge running lanes for marquee back Jonathan Taylor. With 1,811 rushing yards and 18 touchdowns to his name, Taylor was hands down the best running back to strap on the pads in the NFL last season.

While the preseason is a time for NFL teams to take a good look at their overall depth and give opportunities to backups trying to make the squad, the Colts’ upper management has done a tremendous job in building this team with grit and toughness. Yes, numerous starters will not be suiting up for Indianapolis’ preseason debut, but this type of perseverance will be on full display even with the second and third-stringers.

In order to cover the spread on Saturday, the Colts will call upon Texas Longhorns’ great Sam Ehlinger. With Indianapolis’ game plan most likely involving an emphasis on running the ball, don’t be surprised if the Colts use Ehlinger’s legs to pick up much-needed yardage down the stretch. If the Colts can run the ball effectively, then Indianapolis bettors will be in a good mood on Saturday night.

Why The Bills Could Cover The Spread

The offseason more than likely felt like an eternity for the Bills, as Josh Allen’s supposedly game-winning drive was spoiled when Patrick Mahomes and company miraculously got in field goal range with basically no time left to send the game into time. From there on out, it was pretty much all she wrote. Buffalo shortly after losing the coin toss as Kansas City marched down the field and galloped into the end zone to end the Bills’ season. While many believe that Buffalo would’ve done the same by scoring a touchdown if they had won the coin toss, all they can do now is use the gut-wrenching postseason loss as fuel for this upcoming campaign.

Entering the 2022 season as favorites to win the Super Bowl for the first time in franchise history, expectations are at an all-time high for this Bills team. Not to mention, but on paper, this group is even more improved from last year. Buffalo went out and signed the 33-year-old pass rusher Von Miller to strike fear into opposing quarterbacks. With a pair of Super Bowl rings on his finger, the Bills are hoping that Miller’s winning ways can resonate with the rest of the guys in the locker room.

When it comes to this preseason matchup against the Colts, keep in mind that Buffalo has one of the deepest rosters in the NFL. While Josh Allen won’t be participating in this one, the Bills should be in good hands to cover the spread with one of the best backups in the league in Case Keenum in line for the start. Fun fact, but head coach Sean McDermott has also won seven straight preseason games. He has gone 9-2 in his 11 preseason games since being hired back in 2017.

Could we be seeing a possible January AFC playoff matchup in this Week 1 Preseason showdown? While this game will serve as a good measuring stick to see where each side is depth-wise, the veteran leadership of Case Keenum will be good enough for the Bills to cover the spread in this one.