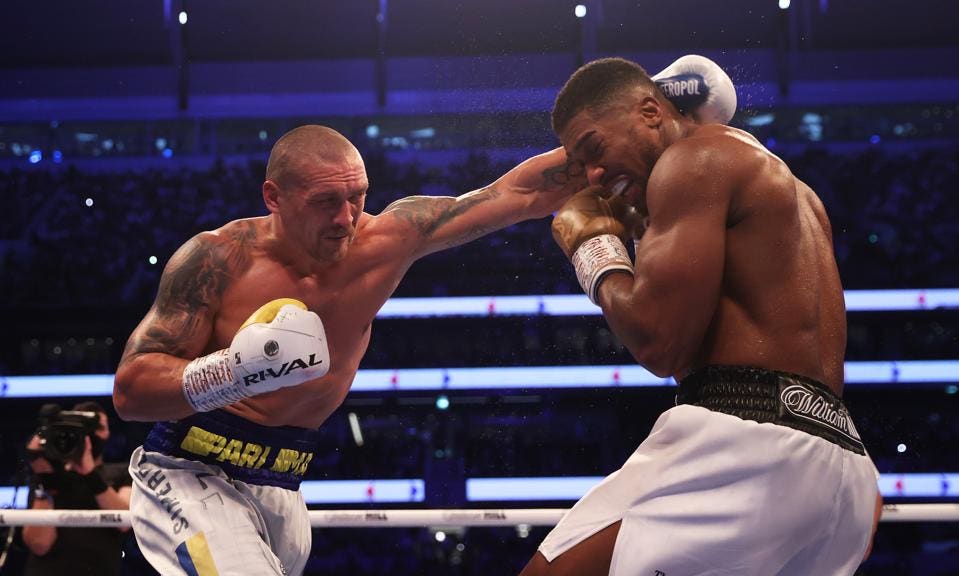 Eleven months after losing his unified heavyweight titles, Anthony Joshua gets a chance at redemption vs. Oleksandr Usyk on Saturday. But there’s a reason why Usyk, despite being undersized, is still the betting favorite. It’s because Usyk was fantastic in their first clash and because plenty of questions remain about how Joshua’s skills and conditioning will stack up against his opponent. Here’s everything you need to know about Oleksandr Usyk vs. Anthony Joshua, including the odds, their records and a prediction on who will win.

Usyk looked wonderful in beating Joshua by unanimous decision last September, but plenty has happened since then. Usyk’s homeland of Ukraine was invaded by Russia, and the heavyweight champion joined his country’s defense forces. It was a physical struggle, and, perhaps even more, it was a mental struggle.

But his team said this week his countrymen want him to win, to hear the Ukrainian anthem played and to see the country’s flag rise in triumph. And even though I spoke to Usyk after his victory vs. Joshua but before the invasion, I imagine his words to me still ring true: “Oleksandr is ready for any kind of fight.”

His training videos seem to support that. Usyk looks even more like a true heavyweight than he did before.

“When we watched Usyk’s videos from the training camp, we realized that he looks like a cyborg,” said his promoter Alexander Krassyuk. “He went through hell in the training camp in the last three months. It did not kill him, but it made him even stronger. I’ve never seen him more determined than now. Not many champions in the world can share their experience going through the war and making their way to the ring to defend their heavyweight crown. It was an extremely complicated challenge for him, but he seems to have passed it.”

Joshua, of course, has his own concerns. He avenged his defeat after shockingly losing to Andy Ruiz in 2019, and he did that because he had a gameplan to box and move and because his opponent came in overweight and undertrained. Usyk has not made that mistake.

The Good, Bad And Ugly From The Green Bay Packers’ Win Over The San Francisco 49ers

That leaves Joshua with the opportunity to try to outbox Usyk—considering Usyk is legitimately one of the best technical boxers on the planet, this seems like a bad idea—or to try to knock him out. Both options will be exceedingly difficult. Plus, Joshua is working with a new trainer in Robert Garcia, and it’ll be fascinating to see how Garcia helps him approach this fight after their limited time together.

“It was a challenge coming off a loss and getting him to do the game plan and do it in training,” Garcia said. “At the end, the job was done. Anthony followed instructions. On Saturday night, we’re going to walk out with those belts. I think he’s peaked at the right moment.”

Countered Usyk: “We learned from each other in the first fight, but this is a continuation and the first round on Saturday will be round 13. We had enough time to study each other. We were born to compete for life, for belts, for everything. The one who does not compete does not win. All our lives are competitions for something or somebody. That’s why we are competing. We’ve had enough time to study each other, and this Saturday will be a great, great fight.”

Here’s more info on the Oleksandr Usyk vs. Anthony Joshua showdown that U.S. viewers can watch on DAZN beginning at 1pm ET on Saturday (ring walks for the main event are reportedly expected at about 5:30pm ET).

Since I think Usyk would beat Joshua seven out of 10 times they fought, Joshua’s implied odds of winning at about 38% wouldn’t compel me to take his money line. But you can get Joshua to win by stoppage at +275, and I think that’s a solid play. Interestingly, there’s more value in picking Usyk to win by decision (+250) than by stoppage (+162).

If you were looking for a fun parlay for this weekend’s action of boxing (and this is only for entertainment purposes), I might take Usyk to beat Joshua at -188, Sergey Lipinets to beat Omar Figueroa at -334, and Emanuel Naverrete to stop Eduardo Baez at -105. If all those hit, you’d secure a $288 profit on a $100 wager.

Even with only 19 professional fights, Usyk is basically already a Hall of Fame fighter. He’s 19-0 with 13 KOs, and even before his success at heavyweight, beating Joshua and Derek Chisora, he was the undisputed cruiserweight champion with victories vs. Krzysztof Glowacki, Mairis Briedis, Murat Gassiev and Tony Bellew.

Joshua has had a meteoric career, at least from a money-making perspective. But his record, at 24-2 with 22 KOs, certainly isn’t perfect. And he’s lost two of his last four fights. Another loss to Usyk might not cut his career short, but it would certainly tarnish his legacy.

Usyk’s home country has been in chaos, but he seems eager to fight. Joshua’s mental status and his stamina issues will continue to be in question until he solves them against an elite opponent. As long as Usyk doesn’t get hit by too many flush punches, I favor him to win. Some have speculated that Usyk could actually knock out Joshua, but I wouldn’t bet on that. Instead, I’ll take Usyk by decision, somewhere in the 116-112 range.